Life is full of changes and so, the five McIntyre brothers' lives are about to change with one single decision made by their widowed mother... Jackson McIntyre, the eldest of Alice's five sons, feels the weight of the family on his shoulders, feelings of guilt since his father's accident, and of carrying out his father's legacy and of taking care of his mother. And now, his mother has bought an inn and has moved out of the rambling homestead, and he must not only worry about the ranch but her safety thirty minutes away from the ranch and on her own. He's not happy, but when he meets Nina, his mother's new neighbor, he feels reassured and drawn to her, not at first...but soon. A young widow herself, Nina seems to harbor secrets. Secrets Jackson becomes compelled to uncover. Dreams, hopes, and love connect on the shores of Corpus Christi Bay and the Star Gazer Inn and the rugged south Texas ranch where the McIntyre brothers are determined to build life their own way, even as they carry on the legacy of their ancestors. Along the way, you'll meet Alice's friends, who have secrets of their own and you'll watch as each of her sons struggle finding new dreams and love in this family saga of hope and starting new—on the South Texas coast with its sparkling topaz water. You’ll want to dip your toes in and stay awhile. 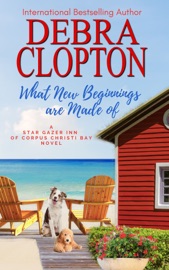